Redeveloping an unutilized property through a professional developer can be a better option to generate more revenues.

Most urban properties comprising of an old building — occupied by its owners or partially by the tenants — can be turned around to become a revenue yielding investment by redeveloping the same into an apartment.

In most cases, redeveloping a property through a professional developer is a better alternative than its outright sale. Selling an inherited ancestral property in India is still not socially acceptable option because of the sentimental values attached to it. Also, selling a property would attract capital gain tax and one has to pay a hefty stamp duty if one buys an alternate property from its sale proceeds.

“All this could be avoided by redeveloping instead of selling an inherited property. Also, one pays the lower municipal tax on the retained portion in the proposed building than if another property is purchased at the market price out of the sale proceeds of the inherited one,” said Jugal K Khetawat, director, South City Projects (Kolkata) Limited.
In any metropolitan city like Kolkata, the value of a vacant property today is calculated on the basis of construction entitlement available on the said land or property. For instance, if you can build 10,000 sq ft on a piece of land, the value of the land will be 10,000 multiplied by per sq ft value of the land component in that area, which in turn is calculated by subtracting the per sq ft cost of construction and the builder’s profit from per sq ft selling rate of an apartment in that area

In redevelopment process, one pays lower municipal tax on the retained portion in the proposed building than if another property is purchased at the market price out of the sale proceed of the inherited one
Jugal K Khetawat, director, South City Projects (Kolkata) Ltd

Again the construction entitlement i.e. Floor Area Ratio (FAR) or Floor Space Index (FSI) varies from city to city and is dependent on some factors such as the width of the road, municipal zoning, etc. In most cities, for instance, it is dependent on the width of the road. A land having double FAR or FSI in an area because it faces a wider road, would fetch in almost double price per cottah or acre than a land in the same area facing a narrower road if the latter has half the FAR or FSI. 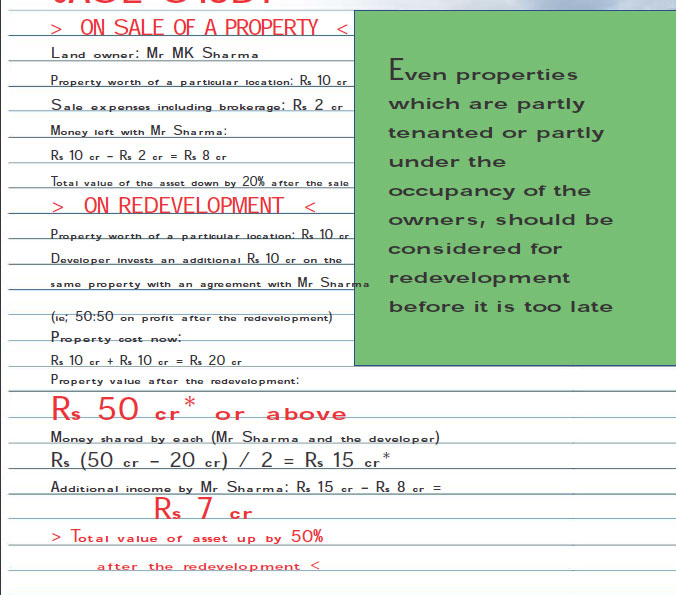 Because of the falling infrastructure and increasing population density, the maximum FSI or FAR (as well as all other related FAR) has been gradually reduced by various municipal corporations over a period of time. In Kolkata, for instance, it has been reduced gradually from non-existence to 4.5 to currently 3 or 2.5 (depending on the location).

Why should you redevelop your property?
If your property is lying underutilized for months or years i.e. it is not built to its full potential (a substantial portion of FSI or FAR is not used) then you can consider redeveloping your property to gain maximum profit out of it. Even properties which are partly tenanted or partly under the occupancy of the owners should be considered for redevelopment before it is too late i.e. the redevelopment becomes economically non-viable due to reduction in FSI or FAR to an extent that it matches almost to what is already built on that property.
By redeveloping a property to its full potential, it is possible for an owner to have a large area for himself. If there is more than one owner, it is also possible to have an independent apartment for each owner and in addition to have cash or regular income through renting of the balance portion of the owner’s share of the constructed area.

How will get the best out of a realtor or developer?
When asked why it is prudent to redevelop the property through a developer, Pradeep Kumar Chopra, chairman, PS Group, said, “The

redevelopment of a property, construction of a multi-storied building and selling of its apartments, is a business which requires time and experience to ‘master the art’. It further requires the competent manpower, and investment to carry out the proposed redevelopment. You also require the network of reliable contractors and reputation or brand equity in order to get the best selling price and terms from the intending purchasers of the apartment”.
He said, “Most of the property owners do not have all these qualifications as well as facilities and therefore, it is prudent to get the development of a property through a professional builder or developer of good reputation”.
If the owner decides to build or develop his own property he shall face all kinds of problems faced by an inexperienced amateur builder and would tend to make several mistakes which would prove to be costly.
It is, therefore, the best to get into a redevelopment agreement with a reputed builder after appraising all the offers for such a development. In such agreements you will generally get a certain percentage of the constructed area in the proposed building in lieu of providing the land and/or property for such development. In any case you will get better returns through redevelopment than by selling the property directly.

a) What will you expect while offering your property for redevelopment?
The developer shall offer you constructed area (owner’s share), the cost of which should be equivalent to the value of the land component of the area retained (developer’s share) by the developer in the proposed building. For easy understanding, the mathematical equation for ascertaining the appropriate owner’s or developer’s share in the proposed building constructed by a developer on the owner’s land through a typical redevelopment agreement is given below:
The value of land component will be equal to selling price of the apartment minus cost of construction added with developer’s profit.
In any case, you should go for such redevelopment agreement only if it fetches you higher returns than when you sell the property outright. In most cases it would be so if you consider the value of the apartments when the construction of the proposed building is completed. Only properties with low FAR or FSI may not fetch higher returns through development. Such property should be sold outright.

The redevelopment is such a business in which it requires time and experience to ‘master the art’. It also demands the competent manpower and investment to carry out the proposed redevelopment
Pradeep Kumar Chopra, chairman, PS Group

A high percentage of the owner’s share does not necessarily mean a better offer. While considering an offer, you should consider the reputation of the builder and his architect, together with the specification of the proposed building i.e. the quality of the building materials to be used e.g. windows, flooring, sanitary, plumbing, lifts and facilities like generator, intercom, fire fighting equipment, etc. Further time for completion of the project (i.e. completion of the proposed building) should be the essence of the contract with adequate panel and termination charges. The owner should have the right to terminate the agreement if the developer defaults on any of the terms of the redevelopment agreement and in the event the proposed development not completed in time to be able to get it completed through developer or contractor (if necessary).

Security deposit
You should also ask for an upfront refundable or non-refundable security deposit as per your requirement, which can be appropriated if the developer does not fulfill his part of the obligation under the redevelopment agreement.
Kolkata-based town planner Prashanta Bhattacharya said, “It is a good concept to redevelop the old properties. With this initiative we can retain the old heritage look, in some cases, of the beautiful architectural structures in the city.”
He said, adding that there should be a proper awareness campaign to encourage people to develop old properties. “I think in future more and more people will come forward to accept the concept”, he added.

d) Other facilities
In the event you wish to be paid partly in cash, the developer can pay the same by reducing the owner’s allocation, at discounted rates. Most of the developers will also provide alternate accommodation to the owners if they or their family members staying within the property premises needs alternate accommodation during the redevelopment period. They will also take the responsibility of negotiating with the tenants, if there are any, and provide them alternate accommodation elsewhere and/or in the proposed building; however the cost for the same will be adjusted by reducing the owner’s share of the constructed area I the proposed building.