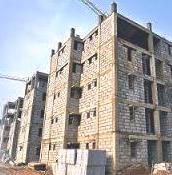 Thousands of deteriorating flats for EWS, which were built in Delhi under the ambitious Rajiv Awas Yojana of the former UPA Government, will get occupants in the near future, according to a published report.

The decision of the Delhi Government is expected to benefit about 20,000 applicants waiting for a house for 30 years.

According to the report, the AAP Government has decided that these flats will go to waitlisted applicants of the 1985 Special Registration Scheme that was launched DDA. However, they will get the flats at revised rates.

“It has been decided to offer flats constructed under JNNURM to waitlisted applicants of 1985 Special Registration Scheme (when slum & JJ department was part of DDA) for residents of notified slum areas, JJ resettlement scheme, slum rehabilitation colonies, unauthorised colonies and urban villages,” a statement issued by Delhi Government reads.

The rate of interest to be charged on delayed payments for flats under the hire-purchase category has been reduced from 12 percent to 7 percent for three months as a one-time amnesty measure.