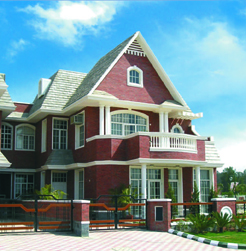 Families shifting away from independent villas to up-market apartments is trending but in the process, space and independence are obvious casualties.

There is a major shift of trend in the demand for independent villas in Noida as problems prevalent in regions like south Delhi and Gurgaon have slowly started to trickle down to Noida.

ADVANTAGES OF VILLAS
• An independent house provides you greater degree of freedom.
• Ability to design the house as per your wish.
• Future modification of exteriors as per the latest trends and wishes.
• If you have keen interest in gardening then you would have space to build on your interest or to keep pets.
• More privacy.
• You can always expand the space as per your requirement in the future when your children grow up.
• You can develop the higher floors when you want to make some additional income through rent.

The concept of villas in India, more specifically in the NCR areas is at a very nascent stage with most of such development being termed as independent houses, bungalows or Kothis situated in places such as Greater Kailash, Green Park, Vasant Vihar, Gurgaon and Noida Sector 44-46 etc.

Most of this development is unplanned, unorganised and construction work carried out by small-time construction  firms. Many colonies in the Delhi region where these so called villas are situated are settlement areas which were not originally planned for the rampant unplanned construction.

Green areas in these regions have been encroached. Problems in areas like Chittaranjan Park and Greater Kailash  are growing at an alarming rate – burglaries, flooding during monsoon, parking chaos and water availability is making living in these so-called posh regions a challenge. A fully built-up villa (all floors) in Greater Kailash, Chittaranjan Park, Shivalik and Green Park would cost anywhere between’ 1 0-40 crore depending on the size and location.

Due to its connectivity to central and south Delhi, gated villas are slowly becoming the product of choice for the affluent families to tackle issues as seen from the current exodus in Gurgaon and south Delhi for gated society apartments.

Top management officials of the major office occupiers in each of the respective cities along with non-resident Indians (NRls) and high-networth individuals(HNls) are the typical target audience in the villa segment.

The concept of gated villas is extremely popular in the US and Europeand has only recently come to India.

We have been contemplating of moving to gated bungalow or villa in Noida as my work is around central Delhi and the distance from Gurgaon to these areas would be a different challenge again.
Poonam Chopra, Resident of south Delhi.

We had no choice but to move to a developer society in Gurgaon from our lavish villas as it is next to impossible to survive without basic utilities
Anju Bansal, A resident of Gurgaon

DISADVANTAGES OF KOTHIS
• Security is a concern and will come at a significant cost i.e. if you want to keep a watchman or gate keeper.
• Facilities such as power backup (especially if you want to install generators to run Ales etc) and water supply would be expensive and managing the same would be a hassle.
• You would need to get access to external clubs and sport facilities. This would be an expensive proposition, for example, monthly access to a good gym could leave you poorer by anywhere between Rs.2500 to 3500.
• Services such as plumbers, electricians etc would need to be identified and called for at the time of need.
• If you have a job which requires you to be traveling to different cities, then security of your household goods would be a cause for worry.

Cities such as Bengaluru and Pune were the pioneers,  and now Noida and Gurgaon are catching up. Noida has a distinctive advantage over Gurgaon for gated villas because of its connectivity to south Delhi, central Delhi and proximity to various state and central offices.

From the buyer’s angle, the quality of life in a villa is far better compared to what it is in an apartment – natural resources such as water and air are shared by less number of people and noise pollution too is negligible.

Problems in Gurgaon have been well documented, whether it’s the tumbling ground water table, power shortages, substandard roads, long traffic jams and law and order. While there has been a trend of affluent families shifting away from independent villas to so-called upmarket apartments to tackle these issues, space and independence are obvious compromises.

Realty & More is interested in articulate, well-informed remarks that are relevant to any of the magazine’s articles or write-ups. We welcome your advice, your criticism and your unique insights into the issues on the realty and allied sectors. You can expect your comments to be followed in right earnest and who know, your comment may be a potential story in the making. Our goal is to provide substantive commentary for a general readership. By screening submissions, we have created a space where readers can exchange intelligent and informed commentary that enhances the quality of our news and information. While most comments will be posted if they are topical and not abusive, moderating decisions are subjective and we will make them as carefully and consistently as we can. Because of the volume of reader comments, we cannot review individual moderation decisions with readers and generally cannot alter a comment once it is posted. – EDITOR

The State Of Real Estate