CBRE South Asia on July 21 announced the findings of its report, tilted ‘India’s Industrial & Warehousing Sector: Tenacious amidst the Turning Tide’. Against the backdrop of robust growth of manufacturing, e-commerce, and third-party logistics (3PL) sectors, the report highlights how Industrial and Warehousing (I&W) activity has gained momentum over the past few years in India. 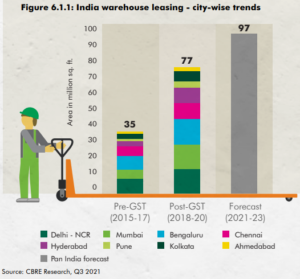 The report delves into the dynamics of the current manufacturing ecosystem in India and its improving prospects as an alternative supply chain destination on account of elements such as favorable demographics, relatively low labor costs, and continued thrust on infrastructure improvement and policy reforms. As a result, the business climate in the country has vastly improved, as is evident from the continued jump in India’s Ease-of Doing-Business rankings. This, in turn, has had a positive impact on the manufacturing sector of the country, which has attracted over USD 121 billion in FDI inflows over the past six years.

Commenting on the announcement, Anshuman Magazine, Chairman, India & South-East Asia, Middle East & Africa, CBRE, said, “Over the past decade, India has consistently aimed at diversifying from a services-based economy to becoming an alternate manufacturing destination in APAC. As a result, the demand in the Indian I&W sector has surged, making it one of the key growth drivers of the real estate industry. With strong government support to ease investment norms through attractive tax sops and policy initiatives, we can expect increased interest from domestic and global manufacturers.”

Even before COVID-19, the manufacturing sector was witnessing a visible shift: away from the previously established destinations towards alternative hubs. As a result, India has increasingly become an active player in the global manufacturing supply chain, on the back of improved domestic capabilities in recent years. This has also been supported by robust Government initiatives such as Make in India, Aatmanirbhar Bharat, Building India Campaign (through the National Infrastructure Pipeline) as well as policies such as the Production Linked Incentive Scheme, aimed at attracting investments across a diverse mix of industries such as electronics, automotive, pharmaceuticals, textiles and food processing among others.

The report also described the current warehouse leasing scenario in the country. The warehousing space take-up over the past five years has crossed 100 million sq. ft. cumulatively, with a historic leasing peak of 32 million sq. ft. reached in 2019. 3PL players accounted for more than 40% of the total warehouse leasing in the post-GST period (2018-20), followed by occupiers from the e-commerce (21%) and engineering and manufacturing (11%) sectors. Occupiers across these sectors have started to increasingly prefer large-sized spaces to consolidate operations, especially post the implementation of the GST. Backed by increasing online retail demand amidst the pandemic, e-commerce and 3PL players are further expected to lead warehouse leasing over the next few years, the report added. 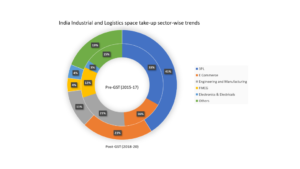 Following a large-scale expansion in tier I cities, occupiers have also started to expand their footprint in tier II and III locations due to improvements in infrastructure and growth of online retail in these areas. Warehouse supply addition over the past five years also crossed 75 million sq. ft. in the country.

In the current scenario, there is a rising demand for an agile supply chain that aims to enable end-to-end control and move from risk mitigation to risk management. As manufacturers focus on increasing CAPEX towards implementing tech in their facility / supply chain, technological advancements such as Artificial Intelligence (AI), Blockchain, Big Data and the Internet of Things (IoT) will ensure that the sector stays resilient in the times to come.