The following is the repoert Anuj Puri, Chairman and Country Head at JLL India

With the advent of shopping malls, retail industry analysts would have assumed a gradual death for the high streets. However, high streets have survived and a few of them have, in fact, strengthened over the years. JLL’s latest research paper ‘High Streets In Vogue – Always’, which studies the nuts and bolts of the 24 most popular high streets in India, states that high streets can be classified into two categories: destination and transit-oriented.

A ‘destination’ high street would typically be the one that has managed to create a niche for itself, either in terms of product categories or in terms of novelty. For instance, the Hiranandani Powai high street situated around the eastern suburbs of Mumbai comprises majorly of F&B outlets (which account for close to 50 per cent of the total brands present there). Despite being away from major transit areas (railway stations, arterial roads, etc.), this high street manages to attract food enthusiasts from a wide range of localities, succeeding primarily on the niche the market has created around this category.

Pune’s Fergusson College road is yet another example of a high street majoring in the F&B category, which accounts for a dominating share in the total brands present here and attracts people from far-flung locations in order to experience different types of cuisines. 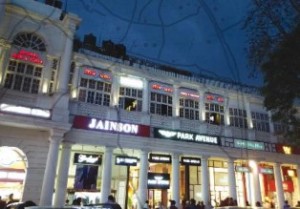 T Nagar in Chennai is yet another example of a destination high street, with close to 1/4th outlets retailing jewellery items. Whenever there is a need to purchase jewellery for marriage or on other occasions, consumers in Chennai are more than likely to visit this market for the convenience of variety and exclusivity.

Destination retail could also come from presence of exclusive brands on a particular high street, as opposed to brands that are omnipresent. A few high streets may have exclusive stores such as the Kalaniketan, Amarsons, Premsons, Akbarally’s, Millionaire etc. – legacy stores (housing premium brands) with a loyal clientele which has existed well before the mall culture arrived in India. Being less omnipresent and the fact that they offer exclusive collections make such stores attractive to discerning customers.

On the other hand, many high streets qualify as ‘transit-oriented’ ones. Such shopping arcades or streets are located in close proximity to commercial destinations, tourist places, arterial roads, railway and metro stations, colleges, etc. They have the advantage of attracting the attention of a large number of daily commuters.

Prominent examples of such high streets include Connaught Place (CP) in Delhi, Brigade Road and Commercial Street in Bangalore, Begumpet in Hyderabad, Mahatma Gandhi (MG) Road in Pune, Colaba Causeway in Mumbai etc. Each of these market benefits from a constant flow of traffic which is either headed to and from nearby office complexes and colleges, tourist attractions, etc.

Whatever makes each of India’s prominent high streets tick today will obviously play an integral part of their ongoing success in the future, as well. Nevertheless, high streets must necessarily adapt to changes taking place in the city, as well as in customer preferences. Managing change is much trickier for high streets than it is for malls, since nothing is really centralised and manageable from a ‘control panel’ perspective. Nevertheless, change is inevitable and important – with high streets as much as the larger Indian retail scenario, the defining concept is a constant and necessary process of evolution.

SVP launches The Imperial in the heart of Ghaziabad