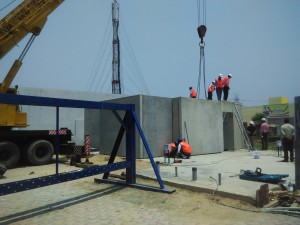 It is perhaps for the first time in the Indian real estate industry that such an event has been organised by any developer.

Expressing joy on the occasion, Kumar Bharat, Director of BCC Infrastructure, said, “Timely delivery is a major concern for homebuyers in India as people don’t want the dual burden of rent and EMI. To speed up the quality construction process considerably we have tied up with Germany’s leading precast construction company ‘WECKENMANN’ for Bharat City flats from Phase II onwards.”

“This event”, he said, “will give everyone a model idea on how this construction technique will speed up the construction process and also strengthen the quality of construction.”

Explaining details of pre-cast technology, Bob Van Gils, Director, Van Boxsel Engineering and Director, WBK Engineering Services Pvt. Ltd. said, “In this technology majority of structural components of buildings (such as slabs, wall etc.) are standardised and produced in plants in a location away from the building site and then transported to the site for assembly.’

Precast (prefabricated) construction technology is bringing encouraging results in Europe and the Middle East. The technology so far has been used in the country for constructing large projects like bridges, Metro rail and commercial buildings. But its various benefits have prompted some realty players to embrace it for housing sector as well.