The banking, financial services and insurance (BFSI) sector has reclaimed its footprint of office occupancy across Indian cities. From around 7 per cent  in 2012, the occupier profile of this sector has steadily increased over the last few years. In 2014, it stood at around 15 per cent, and by 1H15, the share is slightly more than 13 per cent.

This increase continues to ride on the back of a rising number of BFSI transactions in Bangalore and the National Capital Region (NCR), where office demand has been IT/ ITeS-dominated. Among tier-II cities, Hyderabad is witnessing a good number of lease transactions carried out by the BFSI sector after the improvement in business environment seen here in recent times. Hyderabad is followed by Kolkata among tier-II cities.

During the past two to three years, an increase in the volume of leases carried out by BFSI companies has been noticed. The average deal sizes range between 5,000 sq ft and 15,000 sq ft in cities like Mumbai, NCR and Pune. While the number of smaller deal sizes seen in NCR has increased, bigger deal sizes – ranging from 20,000 to 30,000 sq ft – are seen in Bangalore.

Mumbai, the financial capital of India, will continue to see an increase in leasing activity by BFSI companies. Major activity will be seen in its sub-markets like the key commercial district, Bandra Kurla complex (BKC), and the western suburbs. In NCR, prime Gurgaon is emerging as a second CBD due to several companies moving there. Resultantly, the BFSI is also moving closer to their clients in this SBD. 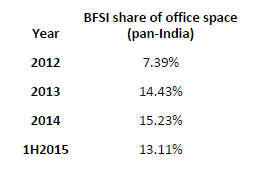 Among the three industries that constitute BFSI, banks have been doing the maximum number of lease transactions in Mumbai and Delhi’s CBDs. The latter has seen many financial services and insurance companies leasing or buying office space actively.

Indian private banks have been seen to typically buy office space and base their central operations in such properties. On the other hand, they operate on lease model when it comes to their retail branches.

BFSI players have traditionally favoured Mumbai and Delhi’s central business district (CBD) but slowly they seem to be moving out. Bigger deal sizes by BFSI players are being seen in the secondary business districts (SBDs). While the larger areas leased in the SBDs are meant to serve mostly as back-offices, the front-offices too could shift to SBDs in a few years.

While rents will remain under pressure in CBD spaces leased by BFSI players in most Indian cities, the rental outlook looks bright for BFSI-leased spaces in key SBD and suburban markets such as Lower Parel and BKC in Mumbai, prime Gurgaon in NCR and Kharadi, Hadapsar in Pune. However, property prices will continue to grow in this segment because of constrained future supply in key BFSI markets.

For the full year 2015, a negative absorption is forecasted in Mumbai CBD as some select occupiers are planning to move out. In contrast, Delhi CBD will continue to see reasonably good activity in terms of churn and commitment. Vacancy of around 15% in Delhi CBD ensures that there is always some activity here.

There are building-level issues in the CBDs, especially in case of Mumbai’s CBD. Many buildings are old and do not have modern infrastructure or even enough parking spots, etc. Many other structures have the ‘heritage’ tag and thus, are governed by heritage regulations.

Given the propensity of BFSI players to pay higher rents, they are the first ones to move out if the buildings, which they operate out of, do not help in maintaining the desired work environment. That is why SBDs will continue to see more BFSI players moving in.

Supertech completes lucky draw for its Basera project in Gurgaon