The difference in the overall vacancy rate between successful and unsuccessful malls stands at more than 10 per cent across major Indian cities. Around 14 malls, having a combined mall space of 3.5-4.5 million sq ft, are expected to withdraw from retail operations in the near future

JLL Research’s latest report ‘is Indian real estate heading towards a tectonic shift?’ examines the transitions that India’s real estate has undergone over the past decade. Among the major trends is the growing divide between successful and unsuccessful malls in India.

In the past few years, developers reduced supply of mall space in India due to rising vacancy levels. However, prior to that, developers had resorted to break-neck pace of construction of malls in response to a spurt in organised retail business. 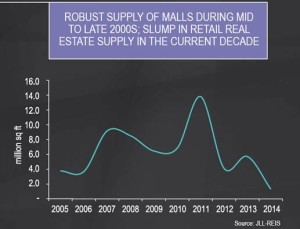 Irrespective of the design quality, mall management practices and so-called best practices, developers continued to supply retail space on the back of growing demand from existing and new retailers. Back then, few developers had realised the right ingredients for constructing a successful mall. Post the slowdown in Indian economy in 2010, realisation seeped in that quality is required for enduring results.

Unlike commercial buildings, whose tenants are stable and share common facilities, management of retail malls is complex. Apart from catering to various brand categories, mall management also involves planning the right tenant mix, space optimisation and zoning, and constantly studying shopper behavior. Malls need to collect feedback from visitors to be relevant in all seasons. Otherwise, they will be out of the competition.

Some malls perform poorly as they are unable to define the mall type, lack research on catchment and selection of wrong partners. By turn of the current decade, it was evident that mall management was not in the genes of every developer.

The haphazard manner of constructing malls without due-diligence left quite a few malls sick. The overall vacancy rate today stands high at 20 per cent  in retail malls across major Indian cities. On the contrary, malls that run successfully have vacancies of not more than 10 per cent, with a selective few ones operating near full capacities.

In recent years, we have seen bad malls beginning to succumb to the business viability stress and giving up hope. Consequently, these malls are either converting into Grade-B office spaces or getting demolished to make way for a new asset class in real estate.

Many experts believe that most of the poorly designed malls that are shutting down or converting into Grade-B office spaces are those constructed in the early years and have become old. This is at best a misconception, because market examples suggests that many old malls still find relevance in a market that rewards better design and mall management. 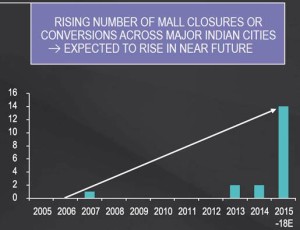 In the near future, we expect more malls to withdraw from the retail realty business as a result of which, the business of average and good performing malls will improve. This is a much-needed course correction, which will continue to happen for some time. According to our estimates, around 14 malls are expected to withdraw from retail operations, having a combined mall space of 3.5-4.5 million sq ft.