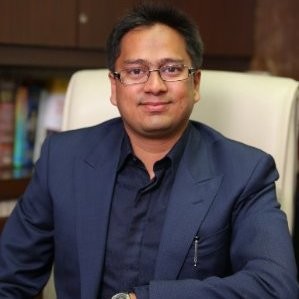 Vievek Jain, Director of Dwarkadhis Projects Private Limited (DPL Homes), a real estate venture of Magppie Group, is playing a key role in shaping long-term growth strategies for the company. He has been associated with DPL Homes since the beginning of 2010 and the challenge before him was to establish DPL Homes in Delhi NCR first and then pan-India. Jain, whose company has got two projects in Dharuhera, one of which is already delivered fully, told Realty & More that he finds the area a better realty destination than Bhiwadi in the extended NCR. Gurgaon, for him is the top destination in NCR followed by Noida. Though market sentiments have been very poor since the last couple of years, Jain sees some improvement now and expects sales to gain momentum.

The following are the excerpts from an extended chat with Jain:

Q. What are your ongoing projects?

A. Our projects comprise Aravali Heights in Dharuhera Sector 24 which is delivered. The next project is Casa Romana, which also is located in Dharuhera, Sector 22 on Dharuhera-Bhiwadi Expressway.

A. Yes, it is fully delivered with 1800 flats. Around 550 families are already living there.

Q. What was the completion time of the project from its launch?

A. We launched it in 2007, and it was handed over in 2013. Some of the approvals came in very late. So, from the date of start of construction, we delivered it in four years.

Q. What are your plans ahead?

A. We, as a matter of policy, have decided that once a project is complete or near completion then only we will step into the new project.

Q. By when do you aim to complete the under-construction project Casa Romana?

A. We will hand over the project towards the end of 2017.

Q. What is the price range of Casa Romana?

Q. Since you have two projects there, what is your outlook on the future prospects of Dharuhera?

A. I would say the future prospects of the area are very bright, because of its locational advantage. Number one, it’s bang on NH8 and number two its proximity to Gurgaon, Manesar, Dharuhera industrial area and Bhiwadi. Many of the Japanese companies located in Neemrana prefer Dharuhera to Gurgaon. More than 500 companies are present in Dharuhera industrial area, employees of those establishments also prefer Dharuhera.

Q How good is public transportation system there?

Q. Among the NCR towns and extended NCR towns, which according to you are the top destinations?

A. If I talk about NCR, then the first and foremost is definitely Gurgaon, followed by Noida in NCR. Now coming to extended NCR, I would say Dharuhera is better than Bhiwadi, and on the other side I would say Noida and Noida Extension are better, but going further in UP I would be a bit scared because of crime rate, etc.

Q. How are the market sentiments these days?

A. Market sentiments were very poor since last couple of years, but now there is some improvement. Prices are also stable. In months to come I expect sales to gain momentum.

Q. As a developer how are your products different from others? What is your USP?

A. We believe in delivering more than what a customer would expect. We would rather demolish if something goes wrong, rather than repairing it. In our first project what we delivered is much more than what we said, which ultimately made the customers very happy.

Development projects in Varanasi to be speeded up

JLL facilitates development of IT SEZ in Pune’s HotbedKharadi