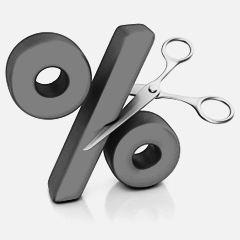 Allahabad Bank, State Bank of Bikaner & Jaipur (SBBJ), Yes Bank and Kotak Mahindra Bank on Thursday announced a cut in base rate by up to 0.25 per cent that will bring down the cost of various kinds of loans.

The move comes after a substantial 0.50 per cent cut in repo rate by the Reserve Bank of India on Tuesday.

“Kotak Mahindra Bank has reduced its base rate from the current level of 9.75 per cent to 9.50 per cent with effect from October 5, 2015,” the bank said in a filing to the BSE on Thursday. All categories of loans (other than the exceptions permitted by the RBI) will be priced with reference to the revised base rate, it added.

SBI associate State Bank of Bikaner & Jaipur (SBBJ) said the base rate of the bank, effective October 5, will be 9.70 per cent from the existing rate of 9.95 per cent.

“Allahabad Bank has decided to cut its base rate by 25 basis points. Consequently, the base rate of the bank will be reduced to 9.70 per cent from existing 9.95 per cent with effect from October 5,” it said in a filing to the BSE.