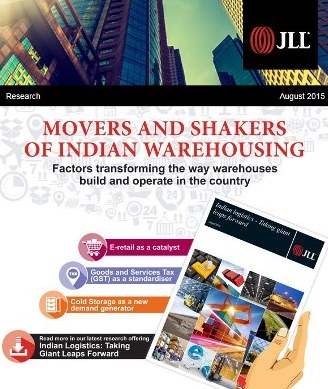 The Indian logistics sector is undergoing transformation with a restructuring of both its stakeholders: transportation and storage. Against the backdrop of expansion in the economy, the logistics industry has assumed a pivotal role in reducing costs by improving efficiency and increasing competitiveness. The interplay of infrastructure, technological advancements and newer types of services associated with this industry is likely to define how it is going to help the customers in reducing costs with the provision of efficient services.

The expected changes in government taxation policies and regulation of service providers would be the most important factors in the process of development of the industry. That apart, growth of overall logistics network from the perspective of trade would be essential in assisting Government of India’s ‘Make in India’ strategy.

In the report Indian Logistics – Taking Giant Leaps Forward, JLL addresses logistics-related properties as a separate and individual asset class within the industrial real estate sector. We offer informed views on the overall logistics sector dynamics and location and cluster-level analysis across top Indian cities. Simultaneously, we estimate the impact of e-commerce on the industrial real estate sector, as well as the effect of future Government taxation changes.

As India depends on roadways – the costliest mode of travel – for a majority of its domestic freight transfers (a good 57% of goods are still transported by road) it is imperative to improve on this transportation network.

Accordingly, in its 12th Five Year Plan, the Indian government has laid out a robust investment of USD 892 billion in the infrastructure sector, with an allocation of USD 146 billion till 2017 to the improvement of roadways alone.

On the storage front, the eCommerce industry is proving to be a big catalyst. It is expected to spend USD 1-2 billion on warehouses and logistics in the next 2-3 years to reduce distribution costs, enable faster deliveries and increase market coverage. In 2014, almost 25 per cent of the total new Grade A and Grade B warehousing supply in India was absorbed by eCommerce players alone. An additional 8-10 million square feet is expected to get absorbed by eCommerce players by 2017-18.

Merger, tech-upgrades of warehouses expected after implementation of GST: The Goods and Services Tax (GST) will be another big push that will help warehousing, manufacturing and logistics industries in India. Touted to have the potential of adding 1-2 per cent to the country’s GDP growth, GST is built in the value-added structure, which would eliminate the cascading effect of taxes (tax on tax). It is also expected to boost tax collection by making compliances easy, and reduce overall taxation levels.

The government is also pushing its ambitious plan of rolling out the GST by early next year. The Union Cabinet has recently moved amendments to the GST Constitutional Amendment Bill. The crucial tax, said to be the most ambitious tax reform in decades, aims to include a host of central as well as state-level taxes and turn India into a national market.

· Cost reduction for manufacturers: As the current tax structure has two layers at the central & state-levels, manufacturing units have to shell out a good amount of money to transport their goods. They end up paying multiple taxes on the transportation. Once GST is rolled out, there will be a common tax structure and thus, the burden of paying tax over tax will reduce. Such units will not have a varied tax structure for transportation of their goods to different locations and will not have to pay each time they transport goods, thus, reducing the overall cost.

· Cost reduction for logistics players: Logistics players create a stock transfer between inventory stocking points within states to avoid this multi-tax scenario. They have a large number of smaller warehouses at various locations amounting to more than 50 small warehouses in some cases, which increases the overall cost of logistics. Also, management of such small warehouses increases the cost and reduces the overall efficiency of the logistics players. With the implementation of GST, the tax burden will reduce and thus need to have such a fragmented warehouse system will decrease.

· Development of new technologies: The current scenario prevented use of new technologies as the cost structures in place resulted in margins of less than 5 per cent on a turnover of few million rupees. Also, installing the latest warehouse management software at multiple warehouses is a costly affair. With implementation of GST, smaller warehouses will re-align/ merge into more productive and logical locations. Without the tax burden, automation will give excellent cost benefits.

· Hub & spoke system: Organizers will now be able to explore a different distribution model such as setting up mother warehouse and regional distribution hubs, which will be away from the traditional carrying and forwarding (C&F) distributor-based models currently adopted.

· Increase in cash flow: The new regime could increase the profit after tax of logistics players, thus giving them a better cash flow.

· Reduction in transit time: The introduction of GST will reduce transit time taken for border crossings and paper work.

India is gearing to move up the logistics performance index (LPI) from its rank of 54 among 160 countries in 2014, according to a World Bank analysis. India will also bring down the cost of logistics in terms of the per cent of GDP – from its current 13 per cent mark. Improvements in transportation network and planning for efficient warehouse spaces are expected to help India to achieve this.

Eco-sensitive zones to be cleared by March: Prakash Javadekar