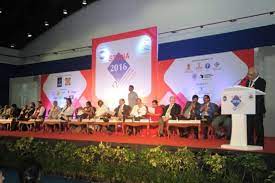 The 12th International Granites and Stone Fair STONA 2016 concluded in Bengaluru on a high with good prospects. STONA 2016 was held from Feb 3 to 6 and was visited by a large number of members from the real estate fraternity, hoteliers, interior designers, architects and the general public at Bengaluru International Exhibition Centre (BIEC), Bengaluru.

According to a press release meritorious students of Geology from Karnataka and the industry players were honored for their excellence under various categories for the year 2014 – 2015, in a glittering awards ceremony. The ‘Export Excellence Awards’ were presented to Classic Marble Company, Mumbai for marble exports and Technopark Industrial India Bengaluru under the category for Industrial Granite Exports. Madhucan Granites, Khammam was awarded Top Exporter of all Granite Products. Pacific Granites, Hosur was awarded for the Export of Polished Slabs and Tiles. The award for Monuments Export was bagged by GTP Granites, Salem and Stone Age won the award for the export of other stones.

Encouraging the meritorious students in the field of Geology, Nasser Ahmad Parry was given a cash prize of Rs.10,000/- along with a certificate for outstanding performance for Studies in Geology, M.Sc applied Geology from Karnataka University, Dharwad and Aarif Ahmed was awarded for his achievement in M.Sc Geology from Mangalore University, Mangalagangotri for the year 2014 – 2015.

Speaking on the occasion R. Sekar, President -Federation of Indian Granite and Stone Industry (FIGSI) said, “The STONA fair 2016 was well received and had set a platform for the Indian Industry to market the Indian stone internationally. Various industry players were recognised for their practice and contribution to the industry.”

According to Ishwinder Singh, Chairman- STONA 2016, “STONA Fair had provided a platform to understand the global trends and had projected the natural stones, products and the creative ability from variety of stones.”