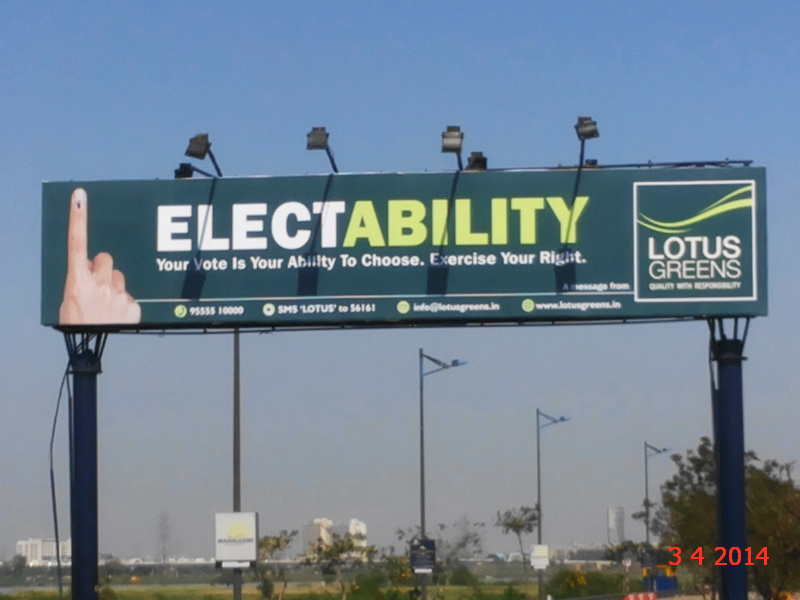 NCR-based real estate developer Lotus Greens has embarked on a special outdoor campaign titled ‘Electability’ whose message and communication revolves around the act of responsibility in casting one’s ballot.

While the upcoming 2014 general election has inspired companies like Tata Global Beverages, ITC, HUL, Google and Facebook to come out with special campaigns, Lotus Greens is the only real estate company to join this league.  The campaign is a timely message explaining the importance of voting and to sensitise voters to ensure a responsive and accountable government is in place.

“Our Electability campaign urges citizens to celebrate democracy, and casting one’s vote responsibly is the best way to do it. In exhorting people to come out and vote responsibly, the campaign strives to waken a greater sense of political maturity and judgment among voters,” says P Sahel, vice chairman, Lotus Greens.

The campaign dovetails the idea that greater citizens’ participation in the exercise of democracy means a stronger representation and how this would help to bring about a good government as the outcome. Lotus Greens has put up billboards and hoarding with the message “Your vote is your  ability to choose. Exercise your right,” at various vantage points in the NCR.

A Tool Book for Indian Realty