The top eight major cities in India, witnessed a delay in supply of over 64% mall space out of  total expected supply, thereby, halting launch of 13 malls which were expected to start operations this year, according to a report by Cushman & Wakefield. Fall in mall vacancy by 14.8% has also been registered. The highest deferment of supply was recorded in Delhi-NCR region, Pune, Hyderabad followed by Bangalore and Kolkata where none of the planned supply entered the market. NCR witnessed the deferment of five malls, followed by two malls in Pune, Hyderabad, Chennai and one mall each in Kolkata and Bangalore. Only three new malls, one in Mumbai and two in Chennai started operations in second quarter of 2013.

As per the report, the sharpest dip in mall vacancy levels was recorded in Ahmedabad and NCR, followed by Chennai, Kolkata and Pune. Inspite of a healthy retail leasing activity and increase in number of enquiries in both main streets and malls, developers have significantly deferred to commence construction. “There is considerable demand for quality retail spaces in both shopping malls as well as main streets in most cities. However retailers, though optimistic about their expansion plans are showing caution prior to launching new stores, which has resulted in the deferment of malls where occupancies have been low and where developers have faced some liquidity issues. Malls now prefer to open with near full occupancy, as was seen in some recent cases. 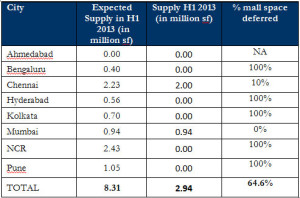 Despite a few malls being deferred during H1 2013, some new malls may be opened before the end of the year making way for more quality options for international and national retailers.” said, Sanjay Dutt, executive managing director, South Asia -Cushman & Wakefield.

The reasons for delays can be understood as developers are facing liquidity issues to complete the construction of their malls. Developers are not in a position to launch their malls until they get sizable occupancy that can support the operations of the mall, indicates the report.