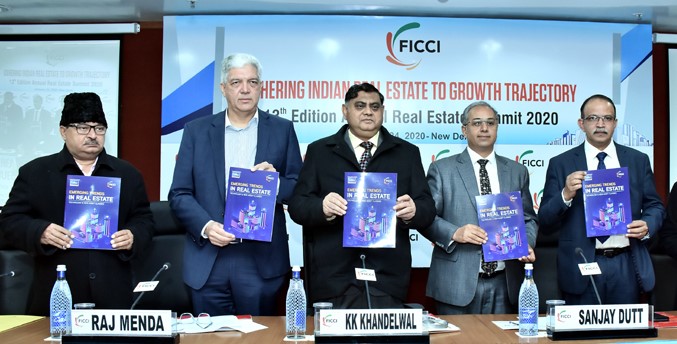 ·     RERA has brought back the confidence of buyers in the market: KK Khandelwal, Chairman, Haryana Real Estate Regulatory Authority

Speaking at the 13th Edition Annual Real Estate Summit 2020, organised by FICCI on the theme – Ushering Indian Real Estate to Growth Trajectory, Mr Abhijat said that PMAY(U) is one of the flagship programs of the government and it is aimed at providing ‘Housing for All’ by 2022, when the nation completes its 75 years of Independence.

“The PMAY(U) mission has achieved a remarkable milestone by sanctioning more than one crore houses in a span of about 4 years,” he said.

Mr Abhijat gave a snapshot of the real estate sector and affordable housing, and how they contributed to the GDP of the country. He also highlighted key initiatives of the government in the sector to support the private players.

He released FICCI-ICRA Report on Affordable Housing during the event.

Earlier during the inaugural session, Mr KK Khandelwal, Chairman, Haryana Real Estate Regulatory Authority, Government of Haryana, said that the Real Estate (Regulation and Development) Act, 2016 (RERA) has brought back the confidence of the buyers in the market and this trust will gradually strengthen.

Flagging the issue of multiple regulators in real estate sector, Mr Khandelwal said that the industry has to somehow pressurise the government for having a single regulator as multiplicity of forums is creating problems and neither the buyers nor the promoters are happy with the situation.

“There has to be a single regulator or if one complete code cannot be evolved for the sector then at least for one kind of problem there should be only one forum. At times, a case is going on at all three places – RERA, NCDRC and NCLT,” he noted.

Mr Raj Menda, Joint Chairman, FICCI Real Estate Committee, and Corporate Chairman, RMZ Corp, said that the country would do well to initiate private REITs as there are large number of pension and sovereign funds looking to invest in long term.

KGK Realty presents AMULYA Everything you deserve, crafted for you to experience & live