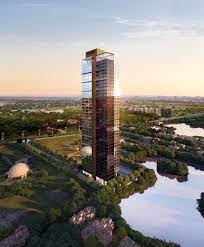 National November 24,2017: The iconic Trump brand that debuted in the city of Kolkata with the soft launch of Trump Tower Kolkata has received an overwhelming response with over 50 % of the units sold since the project was announced in mid-October. The project is being developed by Unimark Group, RDB Group and Tribeca Developers. This is the third Trump Tower to be launched in India and two more are set to be launched soon, in a country with the highest number of Trump branded properties in the world, outside of North America.

Trump Tower Kolkata has now become the fastest selling Trump project ever in India. The developers have also announced a price escalation of 15 % ending the attractive inaugural offer with which sales were launched. Even with the increased prices, Trump Tower Kolkata, remains one of the most attractively priced Trump properties in the world.

According to Mr. Kalpesh Mehta, Managing Partner of Tribeca, one of the developers of the project, “There was a big gap in the super-luxury residential segment of Kolkata, with no branded luxury developments. We knew we were on to something when soon after the project announcement, our sales gallery was over-booked for the first two weeks and we received over 10 cheques in the first few hours. With a very limited number of units, there is an extreme scarcity value with product like this. Despite a price increase, we anticipate a complete sell off of the development in the next 6-12 months.”

According to Mr. Harsh Patodia, Chairman and Managing Director of Unimark Group, “We always believed that the product and the Trump brand would do well in Kolkata, but this has surpassed even our best estimates. Despite the city having the third highest number of Ultra HNIs in India, there weren’t enough offerings in the super-luxury space. The inaugural pricing has definitely worked in generating interest and as well as buzz among the buyers. Never before has the luxury residential landscape in Kolkata witnessed demand of this nature.”

According to Mr. Vinod Dugar, of RDB Group, “The global appeal of the Trump brand along with the absolute best product offering, performed extremely well for us.”

The developers shared the following details about the sales achieved till date:
Over 90% of the buyers are residents of Kolkata
The vast majority of buyers are from business families of Kolkata with many families purchasing multiple residences
Almost all the buyers cited self-use as the purpose of purchase