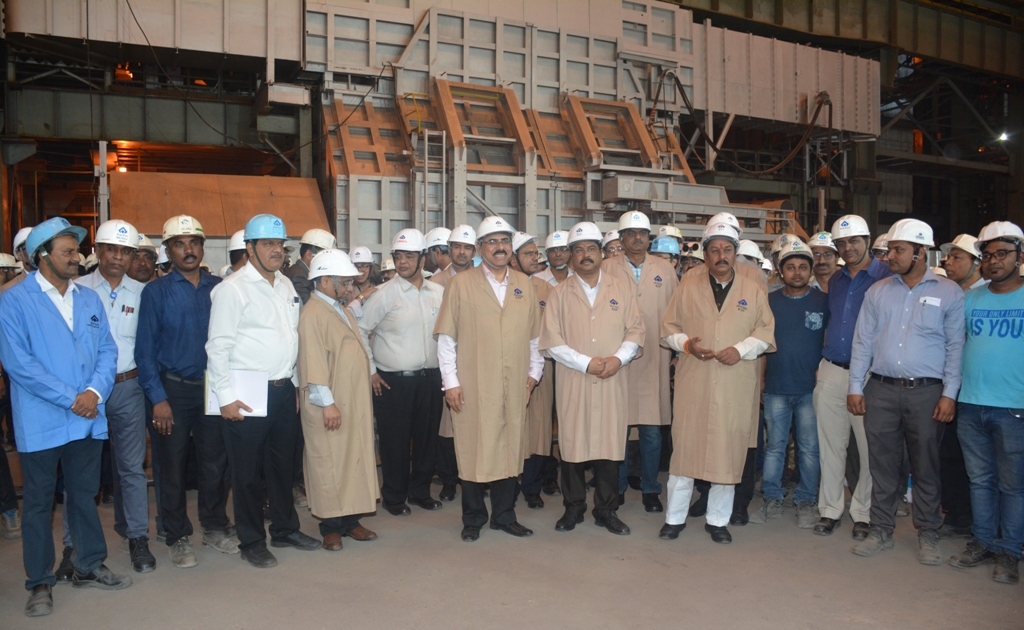 Bhilai / New Delhi, 20th February, 2020: Shri Dharmendra Pradhan, Union Minister of Petroleum & Natural Gas and Steel visited SAIL’s Bhilai Steel Plant (BSP) on his maiden visit today. During his visit, Shri Pradhan witnessed the beginning of the heating process of the 3rd Convertor at the modernized SMS-3. During his interaction with the senior management of SAIL-BSP, Shri Pradhan congratulated the Bhilai Collective for achieving highest ever production of rails in current fiscal year and exhorted senior officials to draw a detailed action plan for enhancing production, efficiency and ensuring a zero accident paradigm. Minister Pradhan also interacted with the representatives of MSMEs in and around Bhilai, worker’s unions and officers association.

Holding an in-depth discussion with MSME representatives of ancillary steel industry in Chattisgarh, Minister Pradhan discussed ways to promote steel industry SMEs in the region by developing a supporting local ecosystem.Stating tremendous opportunity for growth in steel sector in Eastern India, he called for greater localisation of sourcing and promotion of entrepreneurship.

During the visit, the Minister started the heating process of BOF-3 which paved the way for operationalization of Convertor-3 in the modernized SMS-3 shop of the Plant. Equipped with modern state-of-the-art facilities for crude steel production, two convertors and three casters including two billet casters and one bloom caster and other facilities are presently in operation at SMS-3. The new 180 Tonne capacity Convertor-3 will pave the way for 4 MTPA (Million Tonne Per Annum) capacity modex facility of Steel Melting Shop-3 of the Plant.

It may be mentioned here that the blooms cast in SMS-3 are ideally suited for rolling the world’s longest 130 metre rails at the Plant’s Universal Rail Mill (URM). Even as the graph of production from SMS-3 is steadily rising with two convertors in operation, the addition of Convertor 3 would enable SMS-3 to supply higher volumes of cast blooms for URM.

The Hon’ble Minister was accompanied in his visit by Chairman SAIL, Shri Anil Kumar Chaudhary, Directors and other senior officials of SAIL.