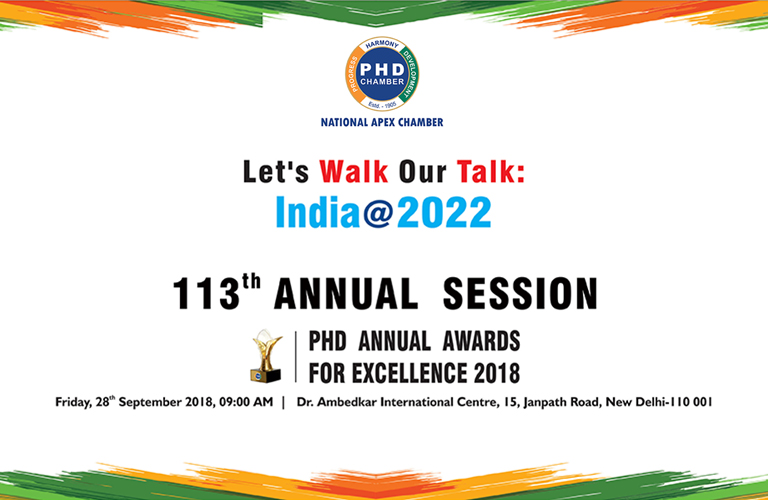 Emphasizing that GST has now sunk into the system of India Inc. and already led to a feel good factor to spur up industrial sentiments with its launch, the PHD Chamber of Commerce and Industry on Wednesday urged the functionaries in the Finance Ministry not to penalize industry for its genuine and unintended lapses in filing its various returns with annual returns.

The Chamber President, Mr. Anil Khaitan while speaking at a GST Conclave on How to Prepare and File Annual Return-GSTR 9/9C (GST Audit) and overview of TDS/TCS Provisions for Manufacturing, Service & Trading Sector here today categorically stated that GST annual returns audited and reconciliation statement should be simplified as there is no automating of ITC and reconciliation thereof.

However, GST annual returns filed with chaste and pure intentions by the industry even if accompanied with certain lapses, the government should take lenient view towards such returns so that with corrective measures, such returns can be accepted with the system, pointed out Mr. Khaitan adding that GST has not only sunk with industry but also it has created a feel good factor within the industry, reflections of which would be forthcoming.

The Conclave was presided over by Executive Vice President (Services), GSTN, Mrs. Kajal Singh who in her inaugural remarks asserted that 90 per cent of GST tax returns filers have been submitting their details with GSTN portal with good intentions and it is the remaining 10 per cent which beats about the bush and trying to mislead the system with fictitious tax transactions against whom penal actions would follow.

According to her, 15 crores tax payers have until recently filed their monthly tax returns in the GSTN portal and the response of tax payers has been largely favourable.

SVP (Services), GSTN, Mr. Vashishtha Chaudhary who was also present on the occasion, however, admitted that largely the system has been working efficiently in terms of receiving GST returns though government is also engaged in improving its systematic details and due course of time things will completely settle down and lead to a win-win situation for both tax payers and tax collectors.

Chairman, Indirect Taxes Committee, PHD Chamber, Mr. Bimal Jain in his theme presentation though praised the government initiative to put in GST in right perspective and proper GSTN mechanism, however, revealed that challenges are still there which need to be addressed and conquered and hoped that in due course of time many issues that still lay pending be resolved as per satisfaction of industry with clarification forthcoming on matters requiring clarity.