CBRE South Asia on August 9 announced the findings of its recent report, ‘Residential Real Estate in India – Challenges And Future-Proofing Strategies For Developers’. 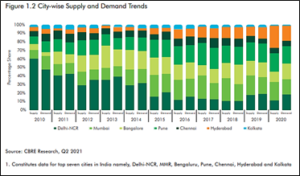 On the back of measured policies announced by the central and state governments, and the RBI coupled with the incentives provided by the developers, the report cites that the residential segment has been showing green shoots of recovery as housing sales grew by 73% on a q-o-q basis across India’s top seven cities in Q42020.

The recovery continued in H1 2021, as sales recorded over 75% growth on a y-o-y basis. Pune led sales activity with an approximately 26% share, followed by Mumbai (19%). It was closely followed by Hyderabad and Delhi-NCR with 18% and 17% shares respectively.

While the report captures the recovery of residential real estate, it also highlights the factors that led to the growth of affordable and mid-housing sales in India, over the last decade.

Affordability at its highest 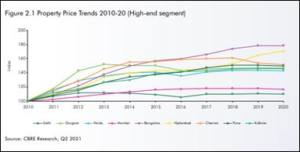 Further, the growth in GDP per capita for the top seven cities was above the national average, with Bangalore reporting the highest CAGR (6.6%). Hence, the income growth overtook the average rise in the price of properties, further contributing to housing affordability.

Affordable housing has consistently been on the Central Government’s agenda ever since the policy on ‘Housing for All by 2022’ was announced in 2014. The reduction in GST on under-construction projects from 8% to 1% in 2019, coupled with various incentives announced in the Budget 2021-22 has helped affordable housing become the major contributor to the sector’s growth. 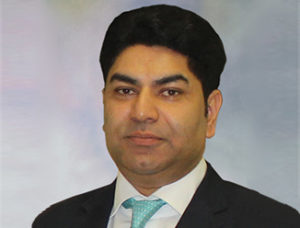 Commenting on the release of this report, Mr. Anshuman Magazine, Chairman, India & South-East Asia, Middle East & Africa, CBRE, said, “The residential segment has played a major role in the real estate sector’s growth in India. The initiatives undertaken by the central and state governments have been crucial and commendable for the revival in the residential segment. The past few Union Budgets were in themselves a testament to the government’s commitment to affordable housing. With incentives such as the all-time low-interest rates on home loans, extension of moratorium period on loans, coupled with reduction in either circle rate or stamp duty across a number of states, residential has not only shown recovery but has become a great addition to asset portfolios.” 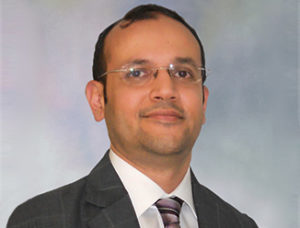 Mr. Gaurav Kumar, Managing Director & Co-Head, Capital Markets, India, CBRE commented, “As work-from-home and e-schooling have become the new lifestyle, the need for owning a home has dawned upon homebuyers across the nation. This has induced a wave of change in the industry as developers got back to their drawing boards to design more accommodative homes to align with the demand. Further, the Government of India has been a major contributor to this rise in demand as it provided a clear fillip to the affordable and mid-segment housing demand.”

Although the residential sector is witnessing green shoots of recovery, developers are still navigating through issues such as limited availability of credit, tax and regulation complexities, construction delays due to labor shortage caused by reverse migration (though abated to a large extent), higher input costs leading to rising construction costs; highly leveraged balance sheets of several developers have added another layer of challenge for the sector. The report discusses these challenges and how developers can navigate through these constraints to future proof their portfolios. Some of the key factors that developers should consider are maintaining financial discipline, investing in technology to expedite construction timelines and move in line with the emerging trends in the RE segment, some of which are listed below:

Going forward, developers would have to foresee and plan for any future disruption to the workforce and project delivery. According to CBRE, below are some practices that could assist developers to emerge stronger and resilient post the pandemic