Paradoxically, it was the NCR real estate market’s erstwhile reputation as a hotbed for untoward market practices that laid the foundation for structural reforms like RERA. Contrary to all previous perceptions of this region’s real estate market, NCR is now the new frontier of change.

From the glory days of local players between 2010 and 2015, the NCR housing market has been completely transformed in the period between 2016 and H1 2021 as. A market once notorious for being driven by speculators, NCR was also a veritable hunting ground for unscrupulous developers churning out unchecked and unnecessary inventory, playing squarely to the speculator gallery, cashing in on the trust of unwitting homebuyers, and diverting their money elsewhere.

“The aftermath of this period is still glaringly evident,” says Anuj Puri, Chairman – ANAROCK Property Consultants. “More than 3,28,600 homes are either terminally stalled or heavily delayed in NCR alone, accounting for 52% of all such units across India’s 7 major cities. Launched in 2014 or before, these projects are ugly testimony to NCR’s darkest ‘Wild West’ years. Unregulated and unchecked, this market saw close to 2.58 lakh units unleashed between 2010 and 2015 by the leading 15 local players alone.”

NCR’s profiteering speculators and cut-throat developers have now faded into the past. To the backdrop of the cancer that had beset this market in previous years, the implementation of RERA in 2017 wiped out unscrupulous developers and brought speculative buying and selling of homes to a complete halt.

Between 2016 and the first half of 2021, corporate and national developers like Godrej Properties Ltd., Tata Housing, Hero Realty, Sobha Ltd., Shapoorji Pallonji Group, Birla Estates and Mahindra Lifespaces took centre-stage. In this period, the top 15 local players throttled their supply down to approx. 70,500 units – a 73% drop from their heyday years. Now, more national players like Prestige Estates are also foraying into NCR. 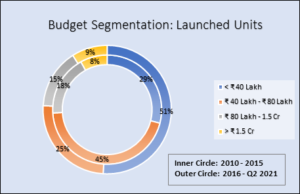 An analysis of new launches during these two periods (2010-2015 & 2016-H1 2021) highlights many contrasting trends. The NCR market now favours buyers rather than developers, and supply largely follows demand: 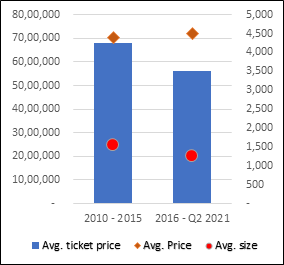 By far the most glaring aspect of NCR’s darker years –stalled and heavily delayed projects – is now beginning to see some light at the end of the tunnel. Several large developers like Jaypee Infratech, Amrapali and Unitech previously delayed projects, causing distress to a staggering number of homebuyers.

The Central government’s SWAMIH funds with a corpus of INR 25,000 Cr. has now come forward to complete nearly 1,500 stalled projects across the country. So far, SWAMIH funds have given approvals to more than 204 final or early-stage projects involving investments of INR 18,500 crore across tier 1,2 and 3 cities. At least 13 projects in Delhi-NCR are likely to be completed within the next one year, as per the government.

Likewise, the government-backed NBCC and a few well-capitalized developers have taken charge of various stuck projects in NCR. For instance,

In testimony to the sea-change in perception about the NCR housing market, unsold inventory in the region has witnessed 26% decline – from 2.28 lakh units in 2015 to approx. 1.69 lakh units as on Q2 2021-end.

It is apparent that NCR’s residential market has been reinvented almost from the ground up. Terms like resilience, transparency and professionalism have finally found a place in its narrative – largely on account of the entry of the large listed and corporate developers. This is evidenced by the significant resumption of homebuyer interest since 2015. 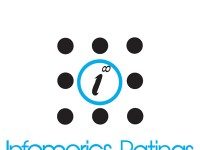 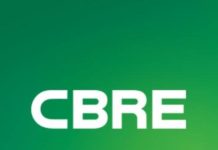 Strong recovery seen across real estate in Q3 2021; Residential at the forefront of revival: CBRE report 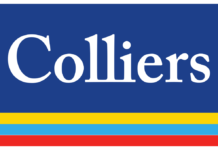 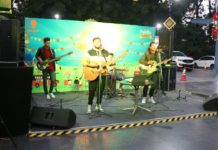 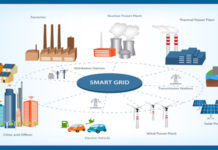 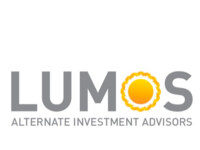