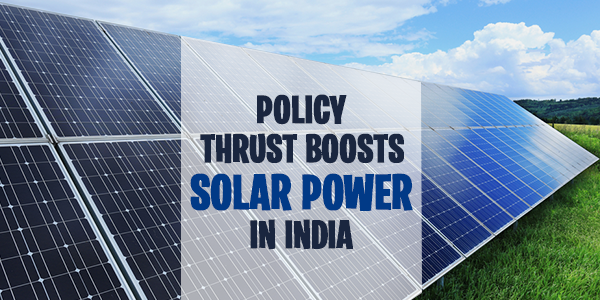 The use of solar energy has been constantly on the rise for the past few decades and today it is a fast-developing industry in the country. With more and more Government projects and other major constructions channelising solar power, the future for solar energy is immensely bright in India. The issues related to this new and CERC resource come under the Ministry of New and Renewable Energy (MNRE). All the tax benefits, subsidies and policies related to solar power are implemented by this nodal agency. Some of these are mentioned below:

The Jawaharlal Nehru National Solar Mission was launched in 2010 by the then Prime Minister Manmohan Singh. A target of 20GW by 2022 was set by the Government to increase the country’s solar power generation capacity. It was to be done in three phases. With the Modi Government coming in 2014, this target was revised to an ambitious 100 GW of solar-generated electricity by the year 2022.

The Act deals with the overall growth of electricity sector, including generation, transmission and distribution of power in the country.  The legislation provides mandatory procurement of renewable energy for distribution purposes.

The main objective of the policy is ‘electricity to all’ and it allows preferential tariffs for power produced from renewable energy sources. The policy also aimed to increase the minimum per capita availability to 1000 kWh by 2012.

It puts an obligation on the state electricity departments to purchase a minimum percentage of renewable energy under the Renewable Purchase Obligation (RPO) and also provides special tariffs for solar energy.

This policy focuses on development of renewable energy and increase capacity of solar energy.

This programme was launched to mitigate the adverse impact of climate change and adapt sustainable growth. It set the RPO to 5 per cent of the total grid’s purchase with an increment of 1 per cent annually for the next 10 years.

Small grids below 33kW come under this policy. The GBI for solar power is to bridge the gap between the base tariff of Rs 5.5 and the Central Electricity Regulatory Commission (CERC) tariff as a fiscal incentive.

It’s a market-based mechanism that enables the obligated entities to meet their RPO. RECs are non-tangible energy commodities that represent 1 megawatt-hour (MWh) of electricity generation from an eligible renewable energy resource. RECs can also be traded to encourage competition and eventually increasing the renewable energy capacity.

For every tonne of coal used in the country, a cess of Rs 50 was to be charged. A National Clean Energy Fund (NCEF) was created to fund the clean energy projects in the country.

A group of 4-10 entrepreneurs, as JLG, are eligible for loan for non-farming activities such as micro-grid installation.

The CSR fund was introduced to encourage participation of private sector in the national growth. Under the CSR, top 500 companies are bound to spend 2 per cent of their profit towards non-profit organisation (NGO) or national interest.

Central GovernmentWith so many policies in place, both the Central Government as well as state nodal agencies offer multiple subsidy schemes to people for installing rooftop systems on their premises. The customer can also sell the excess solar power back to the grid, for which he/she would get a predetermined fare as decided by the local power distribution company (discom).