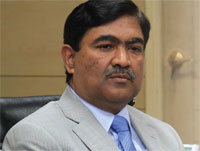 Senior IAS officer Rama Raman, who till now was holding the post of Chairperson and CEO of Greater Noida Industrial Development Authority (GNIDA) relinquished charge as its CEO on Tuesday. However, he continues to hold the post of the Chairperson.

According to reports published in the media, Deepak Agarwal, a 2000 batch IAS officer of UP cadre, will now be the acting CEO of GNIDA even as he will hold the post of additional CEO (ACEO) of the Greater Noida Authority.

According to officials, owing to technical issues, Agarwal will officially be promoted to the post of CEO, GNIDA, in January 2016. Till then he will carry out the duties of CEO, GNIDA, besides those of ACEO.

On September 21, the UP Government had appointed Agarwal as the CEO of the Yamuna Expressway Industrial Development Authority (YEIDA) and posted another IAS officer, Anil Garg, as the CEO of GNIDA. The transfer orders of September 22 included shifting of Garg to the post of CEO, YEIDA, while at the same time, transferring Agarwal from his new posting of CEO, YEIDA, to additional CEO, GNIDA.

A weekend of festivities at Supertech Village Carnival