Despite a stagnation period for about 5 years in the real estate business, the proposed new capital will spur the demand and will trigger the Telangana realty market, writes Madhusudan Sahoo

With the Congress-led United Progressive Alliance (UPA) government’s recent endorsement plan to carve a separate state of Telangana from Andhra Pradesh, the Hyderabad real estate market will get a leg up for both the developers and buyers as well.

Though there is the possibility of a short stagnation period of the growth in the real estate sector in the state, the Telangana market will provide a boost to the residential and commercial real estate demand.

According to experts, the real estate market in the city, which has been showing a stagnant growth for the past four to five years, will see a recovery with the likely resolution of the Telangana issue.

Real estate prices are likely to pick up due to improved investor sentiment in the immediate term. According to a Crisil’s report, resurgence in corporate investment will improve demand for commercial office space in the medium term. “This will provide a boost to the residential and commercial real estate demand as well as massive job creation,” it said.

Developers, however, said that the city would become the joint capital for the next 10 years and despite the slump in the market, there would not be any sudden pull-outs by investors and developers, but the prices may move up to certain extent.

“Despite slowdown in realty business, the property prices in Telengana and Hyderabad are likely go up by 15 per cent. The price rise would start in next 6 months or so,” said Vidur Bharadwaj, director, The 3C Company. 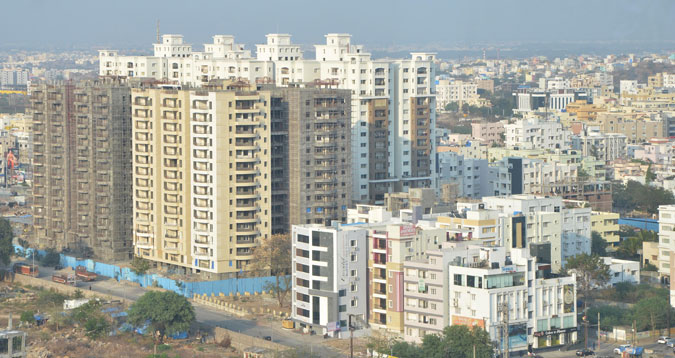 The government had already acquired nearly 30,000 acres of land in Ongole. This has made the town the favourite to be developed as the newly carved-out Andhra state after Hyderabad becomes a full-fledged capital of Telengana.

To build a new state capital in a state, thousands of acres of land would be required to build up the infrastructure of the capital. For Hyderabad, taking the price of land into account, it has been an extremely important issue for the government as well as the developers who are supposed to invest in their projects here.
“As most developers like DLF and Unitech are eyeing on some projects in the state, there will be a price bargain of the proposed land,” said a government source.

In term of the effect of the government decision on real estate demand and pricing dynamics, it is unlikely that end-user demand will increase immediately. However, demand will start picking up considerably in few months and this will lead to better appreciation in many areas.
According to a report by Jones Lang LaSalle India (JLL), realty markets will see more investments from the developers in the country and the locations which will see the fastest uptick include those on and around Outer Ring Road, the CBD area of Banjara Hills and Jubilee Hills, and areas such as Gachibowly, HiTec City, Kukatapally, Miyapur and Chandan Nagar.

“Investors, who had been playing with the notion of pulling out of Hyderabad because of the unresolved political climate, have the requisite level of assurance now that they have made the right decision, and more investments will now pour in to the sector,” said Sandip Patnaik, managing director, Hyderabad, Jones Lang LaSalle India.

When it comes to commercial real estate, we can definitely expect increased action as corporate clients who were sitting on the fence will now feel encouraged to enter or further expand in this lucrative market, Patnaik added.

According to property research firm Knight Frank, Hyderabad has witnessed an extended slump due to the prevailing political uncertainties. Weakened consumer sentiments have affected the market deeply with no signs of recovery since the past two years.

“But now that the prolonged indecision has finally come to an end, developers expect Hyderabad’s construction sector to once again get back on the growth trajectory,’ said Knight Frank India chief economist and director research Samanthak Das.

Since the residential sector is highly sentiment driven, the Hyderabad market failed to attract buyers. The Knight Frank report said nearly 8,500 units were launched in the second half of financial year 2013, showing an increase of almost 33 per cent compared with the second half of financial year 2012. “However, nearly 28 per cent of the total launched units till date are unsold. Hence a steady absorption rate is required to sustain the prices,” it said.

But the local realtors are of view that the areas have been identified in the city where demand will be high. The demand for the real estate will pick up only after the prices are set with market orientation.

Reality In Realty
*Despite slowdown in realty business, the property prices in Telengana and Hyderabad are likely go up by 15 %.
*More investments will now pour in to the sector
*Developers may see a price bargain for the proposed land
* For commercial real estate, corporate giants may enter or further expand their business in this lucrative market