As incomes rise, aspirations change and brand awareness increases among the non-metro consumers, an increasing number of international and Indian brands have started foraying into these largely untapped markets.

As the markets in metros mature, brands have started expanding their footprint in non-metros to capitalise on the growing demand. However, as supply of quality malls is less, many brands have to either open their stores in the already-established high-streets, generally located in the heart of a city, or explore built-to-suit (BTS) options.

The lack of entertainment options and organised retail, when compared to the metros, has paved a way for high-street retail culture and rising demand for such offerings. Despite a lack of supply and options in terms of organised retail, non-metros like Ahmedabad, Jaipur, Ludhiana, Indore, Chandigarh, Bhopal, Surat, Amritsar, Nagpur and Lucknow have witnessed considerable growth in retail development in the last four-five years.

With these cities having favourable demographics and a high propensity to consume, many national and international brands are creating their presence here. Consumers in some of the Tier-II cities around New Delhi travel to the malls here to shop for luxury and high-end brands.
Interestingly, it is the mid and mass-segment brands that are expanding the most in non-metros owing to the market dynamics and demand potential. Many are trying to gain first-mover advantage.

Inclination towards cultural events and traditions continues to remain strong in Tier-II and Tier-III cities. Therefore, customising to the local culture becomes very important in each city as standardised store formats do not necessarily work. The formats, sizes and pricing – all need to change as per the spending power and target audience in each city.

Many of the food and beverage (F&B) players customise their menus to include local flavours and suit the taste palate. Department stores and hypermarkets incorporate F&B brands or cafes in their stores to attract more footfalls and extend the time spent by consumers in the store. Likewise, fashion brands also customise their merchandise according to demand and demographic parameters.

Sales per square feet and productivity of space utilised have become an important parameter for success of a brand. A majority of the brands are focussing on right-sizing their stores according to the location, format and demand from consumers. Due to the onslaught of discounts from ecommerce players, smaller formats are also coming up apart from the standard formats.

The flagship stores, which showcase a brand’s variety of merchandise, are generally bigger in size, and are generally found in prominent locations across these cities. So while store sizes may be comparable in the metros and non-metros, brands generally have a larger footprint in the metros by having several smaller stores in different malls and high-street locations vis-à-vis a single store in a non-metro.

It could also be due to brands wanting the non-metro consumers to have the same experience as their metro counterparts. The same holds true if we compare the store sizes at high-street retail locations in metros and non-metros.

Gazing Into The Future
A look at the average rentals across some of the established high-streets in metros like Delhi and Mumbai shows how non-metros like Chandigarh have a similar range of rentals as the former while Goa has higher rentals than Bangalore. 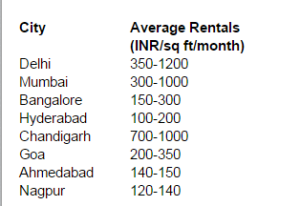 As bigger cities would reach saturation point soon, the next phase of retail real estate growth is expected to come from non-metros. The rentals in non-metros may increase in quality mall supply and prominent high-street locations depending on the economic conditions and consumer demand in the long run. The upward movement, though, will be in line with growth in consumption.