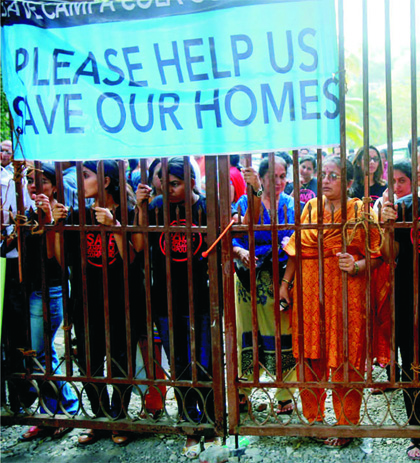 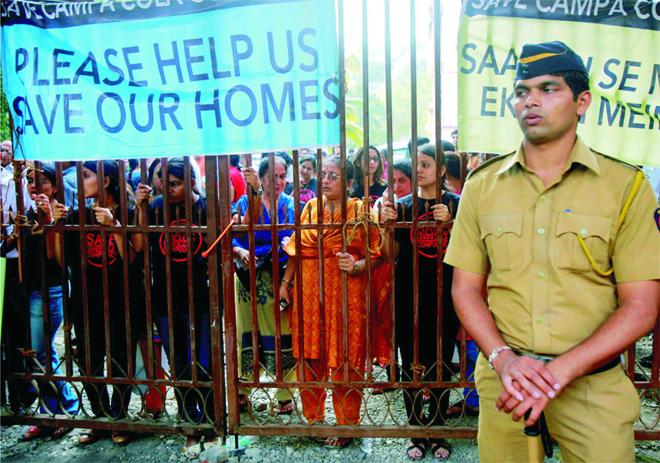 Located in a tony Mumbai locality, the Campa Cola society issue has grabbed national headlines in the case which is a typically human story of craving and bamboozlement consequently making way for possible tragedy. A blow-by-blow account, Pics by Gopal Pandey.

The Campa Cola society issue is a story of in-your-face violation of the building and construction norms by the greedy developers and builders and how some enterprising souls bought the illegally constructed flats despite knowing fully well that they were being sold at less than the market rates. Moreover, this case also highlights how the underworld overtly controlled the city’s construction activity till a decade back and still does so albeit indirectly. 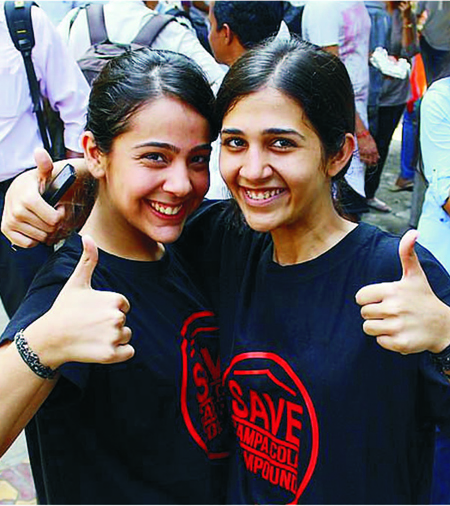 The 90-odd flat owners may be exulting over the Supreme Court staying the demolition of illegal flats at Campa Cola residential society at upscale Worli in Mumbai, but the Damocles’ sword of uncertainty is certainly hanging over them.

After a hullabaloo, tear shedding, scurrying politicians and of course, the media taking cudgels on the behalf of the ‘flat owners’, the apex court took Suo-moto cognizance of the matter and passed an order staying the demolition till May 31, 2014 giving a few more months to the Campa Cola society residents to vacate the flats. Many residents mistakenly thought this stay to bean order to regularize their illegal flats, but this was a plain misreading of the court order which has questioned the intentions and conduct of the occupants.

No one will be native enough to believe that the so-called ‘aggrieved’ residents of the Campa Cola society were in the dark about the illegality of the buildings. At ~35,000 per square feet upwards, Worli is one of the most expensive real estate areas not only in Mumbai but in the entire country.

According to investigation carried out by this correspondent, it transpires that the BMC had given a plot of 17,908 sq metres, off BJ Kher road, near Worli, to Pure Drinks Company on April 5, 1950, for industrial purpose on a fixed rent of 1 rupee per year. In 1980, the company applied for de-reserving this industrial plot and converting it into residential premises. Accordingly, the BMC approved of the application and de-reserved 13,046 sq metres of plot, allowing it to construct a residential building and kept  4,856 sq metres of land for industrial purposes. Thereafter, the company director Madanjit Singh entered into an agreement with the PSB construction company for building a residential complex on the plot. 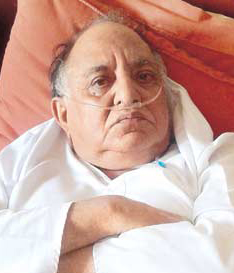 It’s not only me who is to be blamed. The other builders have to be held equally responsible for today’s situation. Jayant Tipnis, the architect, thought that he’d be able to get the BMC to grant the builders permission to construct the higher floors, but he failed. He was the one who was to get the plans approved. It was Tipnis who did not follow up with the BMC after I paid the penalty of Rs. 6.5 lakh as regularisation charges for constructing more than the sanctioned plan of five floors.
B K Gupta, Builder

Though BMC granted permission to construct the residential towers of not more than five floors, the builders went ahead and built seven buildings of 69 floors with two of them being towers of 17 and 20 floors respectively, there by blatantly flouting the floor space index (FSI) norms by constructing 35 illegal floors.

I am not the one to be blamed as I had already notified the builders in writing, telling them not to proceed with construction of the floors that are in question today, because there were no permissions for them from the BMC. The BMC had asked for ~ I I lakh for approval of the amended plan, but there was a conflict among the builders and they paid only half the amount. Builder Gupta was the one who had suggested to the residents that they approach the court to get civic water supply, thus prying the lid off the unauthorised construction
Jayant Tipnis, Architect

If land and FSI are available on the plot, a new building could be constructed with fresh building plans and permissions to house the 96-odd unauthorized flats facing impending demolition.
Goolam Vahanvati, Attorney General 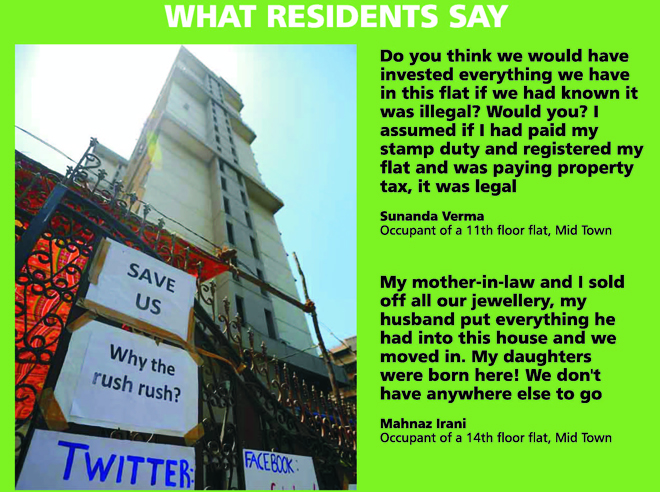 Though the residents are now protesting that they were unaware of the illegality, none other than Jayant Tipnis, the architect of the Campa Cola society, nails their lie. According to him, the residents were aware of the illegalities in the structures, but chose to buy these flats as they were sold at low rates. “People knew that these flats didn’t have occupation permission. Even the water charges were double, municipal taxes were double,” said TIpnis to prove his point.

Our sympathies lie with the residents of Campa Cola society. They want us to come out with an ordinance. But we are considering possible legal options including examining the possibility of constructing a new building to accommodate the aggrieved residents
Prithviraj Chavan, Maharashtra CM

‘Whether it was one-third or half. they were definitely cheaper than the market rates. Residents could have easily sensed something suspicious as the flats in the housing society were available at cheaper rates,’ said Chandrashekhar Prabhu, urban planner and activist.

‘If there is no water, no electricity connection there must be something wrong with the building. So it is hard to believe when someone says that we didn’t know anything,’ he added.

Even the apex court in its ruling pointed at this theory. While pulling up the residents of the society, the Supreme Court had said that they were well aware that the revised plans submitted by the architect had not been approved by the planning authority. The court said that the residents were informed by the developers in this regard too.

Though the Campa Cola society issue came to the fore only recently, when the BMC issued eviction notices to residents of the illegal floor; under Section 488 of the Mumbai Municipal Corporation Act warning them not to obstruct the civic staff when they initiate demolition.

The residents of the Campa Cola compound have had a long legal fight since 2005 when they first went to court for water connection and regularisation of the flats.

The demolition notices were challenged in the civil court which granted a stay. The residents, however, lost the case in the High Court in 2011 and subsequently in the Supreme Court in February 2013 when it refused to regularise the structure.

The BMC then issued a demolition notice on April 27, 2013, asking the occupants of the illegal flats to vacate within 48 hours. However, the residents moved the Supreme Court whose intervention ensured that the residents got a few months window to vacate their flats.

HOW THE DRAMA UNFOLDED

Of the 9O-odd illegal flat owners who were supposed to vacate their homes by November 11 , only a dozen or so had obeyed. The other.; were hoping that their homes would be saved somehow. As the BMes earth mover came dangerously dose to one of the two gates threatening to tear it down, there was not much commotion. Lunch packets were being passed around, people were chatting and if it wasn’t for the heavy police presence outside you wouldn’t have thought of the crowd as being afraid of losing their homes. Even as the BMC officials disconnected power and gas to some of the vacant flats, the residents were hoping for an ordinance by Maharashtra Chief Minister Prithviraj Chavan regularising the illegal flats. But as  the sun rose on November 12, the expected ordinance did not arrive. Instead, BMC’s bulldozer arrived as the municipal staff swung into action by breaking open the maingate so as to enter the compound. This led to vociferous protests by the residents who resorted to sloganeering against BMC. It led to a scuffle with the police who forcibly moved them away from the gate to facilitate access for the civic squad. A lathi charge had to be resorted to on the protestors which included women too.

The residents then blocked the entrance and refused to allow civic officials to enter the premises as the BMC team was expected to cut power and water supply in the remaining illegal flats. Commotion reigned supreme as the BMC officials entered one of the meter rooms to disconnect the power supply to the entire building; it became clear to everyone that this was the beginning of the end.

Several residents were in tears as they packed their belongings. Nandini Mehta, a resident from Midtown Apartments, said: “It feels like I have to start all over again, just like after I got married. Only that now, my children are studying in colleges.”

At least 10 residents are still repaying home loans. “I had taken a ‘2-crore loan to buy the flat and I have yet to pay’ 15 lakh. Even after our flat is demolished,  we will have to continue paying the loan or else the bank will attach other properties. Our underlying asset will be gone and we will have to continue paying, not to mention the BMC’s demolition charges. It cannot get any worse than this,” said a resident of Esha Ekta Apartments.

However, by afternoon, the mood changed from desperation into exuberance after the word was out that the bench headed by Justice G S Singhvi took Suo-moto cognizance of media reports and stayed the demolition process for a few months to May 31 , 2014.

WHERE ARE THE BUILDERS?

After selling away the illegal flats, the builders vanished simply. Two of them – Ishwar Singh Chawla and Yusuf Abdulla Patel of PCB Constructions are dead. The third builder Balkrishna Premdas Gupta is 73 and confined to bed while Manmohan Singh Bhasin and Moinuddin Tayyab Soni are absconding.

A Perspective On Illegal Buildings In Mumbai