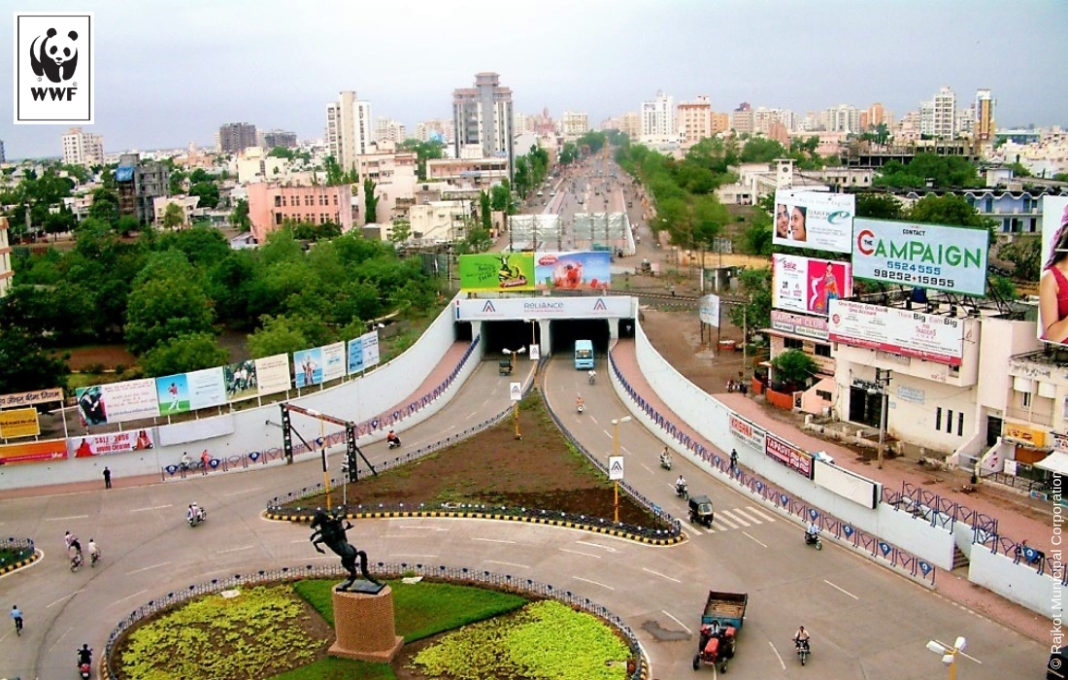 Rajkot has been declared as the National Winner for WWF’s global One Planet City Challenge (OPCC), for the second time in a row. The National Winner in the previous edition of this challenge in 2016 and one among the 99 cities under Government of India’s Smart City Mission, Rajkot demonstrates a comprehensive approach in undertaking progressive actions towards integrating sustainability in its initiatives to combat climate change. The climate smart plans and actions undertaken by the city under the OPCC platform also aligns with the Government of India’s Smart City Mission which is aimed at developing sustainable and citizen friendly cities. In the current edition, the city has made significant commitment in reducing its GHG emissions, in addition to strong strategies to drive this change.

The One Planet City Challenge, is a biennial global challenge that recognizes cities for their ambitions and innovative actions in sectors such as energy, transport, housing, waste and mobility solutions to power the global transition to a low-carbon, climate-resilient future. WWF works in collaboration with ICLEI – Local Governments for Sustainability, which assists cities in reporting their data on it’s carbonn® Climate Registry platform.

Along with Rajkot, 10 other cities from India participated in the 2017-2018 round of this global challenge, in which Panaji and Pune were also selected as finalists. These three cities were amongst the 40 finalists from the 132 cities across 23 countries that participated in the challenge this year. While Rajkot emerged as the national winner, Pune also received a special mention from the jury for its sustainable mobility plan as well as for its energy efficiency and waste management initiatives.

After an initial evaluation by WWF and a global consultancy, a 19-member jury comprising of urban sustainability experts from around the world selected one city from each country as the National Winner and amongst them – one Global Winner. Rajkot is now in the run-up to bag the ‘Global Winner’ title alongside 22 National Winners from across the world.

Rajkot impressed the jury with its ambitious and innovative actions, especially on the uptake of renewable energy, waste management and adoption of sustainable mobility. It has also demonstrated promising commitment to reduce emissions, along with multiple initiatives to increase energy security. One such action by the city is the way they have intelligently expanded its existing BRT system based on demand assessment and implemented a cycle-sharing project across key areas of the city, linked to the BRT stations. The city also plans to further expand its public transportation infrastructure. With Rajkot’s commitment to reduce 25% of total GHG emissions by year 2020 from city’s baseline annual GHG emissions in 2012-13 and its comprehensive strategies in driving this change, the city stands out as a role model for other cities in India and around the world.

“Smt Binaben Acharya, Hon’ble Mayor, Rajkot, remarked, “It gives us immense pride in knowing that Rajkot has once again been selected as the national winner from India under the global One Planet City Challenge 2017-18. Rajkot Municipal Corporation has embarked on a journey to adopt and implement various innovative and sustainable measures in its local practices along with engaging with the citizens in the process. We hope to continue implementing and mainstreaming sustainable actions in transportation, energy efficiency and renewable energy sectors while being engaged with WWF-India and ICLEI South Asia in future as well.”

Mr. Ravi Singh, Secretary General & CEO, WWF-India, said, “Cities account for about 50% of the global population, while consuming 75% of natural resources and contributing about 70% of energy-related emissions. Given the rapid pace of urbanization, cities have a significant role in meeting the climate and conservation goals, both at the local and global level. It is encouraging to see Indian cities taking the lead in positive and impactful ways to address climate change and related challenges. The efforts by Rajkot are commendable in this regard and we congratulate the city on becoming the ‘OPCC National Winner’ for the second time.”

Since the inception of the Challenge in 2011, WWF has engaged over 411 cities across five continents. India became part of this global platform in 2012 and was the first developing country to join this initiative. Since then, WWF-India has engaged with 24 cities for this challenge, out of which, Delhi, Coimbatore, Thane and Rajkot have been the National Earth Hour Capitals in the earlier editions.

Rajkot will be felicitated at the OPCC global award ceremony on September 12, during the Global Climate Action Summit (GCAS), which will be held in San Francisco from 12-14 September 2018. The Global Winner will also be declared at the ceremony.