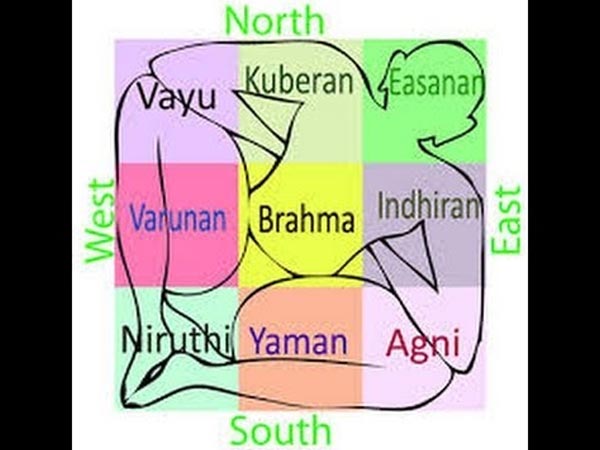 Brahamsthan is a special central zone in a premises which is free from any obstructions in the form of a wall, pillar or beam, furniture or fixtures and is often well lit from above mainly by sky light or natural light. Brahamsthan is a principle of Vedic architecture that is assigned to the centre point of a building or geographical area. Our Vedic architecture is based on Vastu Shastra. As per Vastu shastra 1/3rd area of the premises from the centre should be left open to the sky. In ancient days, this area used to be called as “chowk”. Brahmasthan, the unique feature of ancient architecture based on Vastu Shastra is central, holiest and powerful zone of the house. All directions meet at the centre of the house and disperse positive energy in all directions. This positive energy is very useful for living beings of the occupants of the house. Brahamsthan is equally important for factories and industries. The more open area is in the center of a premises, the more positive energies are created in and around the house or the building.

These positive energies are utmost essential for the peaceful, wealthy and blissful relationship among the members residing there. In scientific terms, this area holds or acts as the centre of gravity for the building or structure, hence should be left open to avoid much harm to the building.

When a free space on earth is enclosed in four walls, it becomes a living entity and starts breathing like human does. It has its own vibrations flowing in a particular manner. If we design a building in such a way that its energy vibrates in the same manner as the energy of people living in, it is going to bring nothing but only harmony, peace, tranquillity and oneness with the universal self. The structure of the Vastu inspired building vibrates with the cosmic energy and the bodily instruments resonates with them. To offer supreme bliss to the house and people living in, the ordinary house can be transformed into the energy cell with application of vastu principles.

Brahamsthan in olden days were easy to build, plots were broad, houses were big and there was enough space in the plot to leave 1/3 space vacant in the centre and build rooms and other facilities around it. However, with passage of time as population kept growing, lands shrinking, and flats culture coming in, it is becoming difficult to take out space for Brahamsthan. Keeping 1/3 area free in the centre of a house is a major challenge, especially with the apartment structure coming in. You may still find these Brahamsthan in old Haveli’s in Rajasthan or old palaces across India. There were social and scientific reasons behind keeping the space vacant in middle. Socially, it was a place for family to sit together every day and scientifically by placing a Tulsi in the centre helped in enhancing the spiritual ambience of the house. There are various other benefits looked for attainment through Brahamsthan.

Firstly, centre of a building is the point of gravity, technically If there is a pillar or post in the centre, at the time of earthquake, entire load of earthquake will come on the pillar and the same will start trembling and shaking, jeopardising the life of members, as it won’t take much time to push fall a building. whereas if centre of gravity is divided in four parts in the four corners of building, earthquake is less likely to harm the building and its members. That makes the building earthquake resistant. Secondly, the open centre space acts as the chimney and air circulatory system to remove unwanted hot, pollutant air from house and bring in fresh one. However, in today’s scenario, where anyways finding one third area for Brahamsthan is neither possible nor feasible for anyone, giving at least 1/8 of the area to Brahamsthan is essential. With limited land we must try to utilise every inch mindfully therefore by not wasting any area with unwanted stuff. Vastu always advices to keep your house free from useless material. It also drags your attention to the fact that “Space” is meant for healthy & spiritual living and not for collecting garbage. Scientifically also collecting unwanted things means inviting dust, bacteria and other unhygienic organisms which may impact us negatively.

Now and then we encounter people confused about number of Brahamsthan a premises can have, and answer is “one”.  There is just one Brahamsthan in every building. However, it is likely that Brahamsthan of entire plot is same as the Brahamsthan of the built-up area in a small plot or piece of land.

Tulsi and its importance in Vastu shastra